skip to main | skip to sidebar

Ever tried to get the Netcomm Roadster V.92 USB (AM5055) modem working with vgetty? It isn't obvious and there is almost no documentation out there on how to make it happen. Following a few hours experimenting...

In /etc/mgetty+sendfax/voice.conf you need:
Then you need to record your actuall message, save it as a .wav file and then convert it to the appropriate format for the modem:
And that's about it.

Here are the 3 chapters from a DVD - Wild Water West - that Hamish and Hew put together after a fantastic summer of paddling here in the West.

The 1st chapter is a day we had at Bells Rapid, about 30mins from Perth on the Avon river... my rolling demonstrates why I don't swim... that and the carton of beer at the end :)

The 2nd chapter is the mighty Murchison river (see the story written for WS) which was absolutely fantastic. The scenery, the big waves and the great music... they have piped music all the way down the river... obviously ;)

The 3rd chapter is just some people doing a drop on the Lower Murray... hopefully we will get a DVD this winter of our paddling on the Murray. It is a fantastic river

Anyway, the full DVD is available on request.

If you can't play these moves, you need to get the latest version of Apple's Quicktime or download VLC or MPlayer which can all play these highly compressed files (H264 codec).

Yes, it is getting frequent, which is good for iVEC.  The AGE Article

Anyone would think I'm paying people for this.  Computer world article 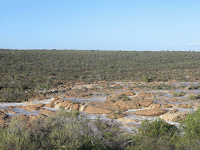 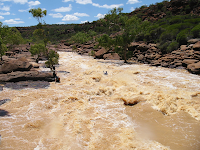 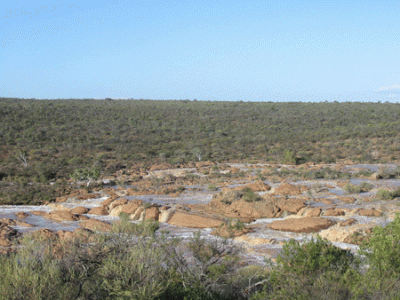 To put this flow in perspective, the white water course used for the 2000 Olympics in Sydney flows at about 11cumecs. Most Australian rivers are paddled at between 15-30cumecs. So, 250cumecs is a monster for Australian conditions. Rather than being a dry river bed, the Murchison was transformed into a raging river with huge pressure waves, water falls and spectacular scenery. 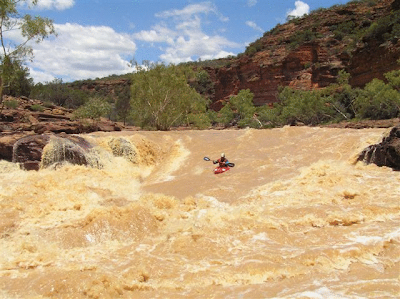 The trip started on the 26th (Australia Day) with myself, Ken and Sean strapping our play boats on my Ford Falcon and driving 6hrs north to Kalbarri, at the mouth of the Murchison. The river had dropped to 150cumecs, but that didn't stop us taking a detour off the road, down a unmarked sandy track to gaze at the wonder that is Hardibut. Hardibut is massive rapid approximately 250m wide and 1km long. It consists of approximately 100 waterfalls and large drops all interlinked. An impressive site with no clear line though the rapid.

After marvelling at the river for an hour or so, we pressed on to Kalbarri where we met with 5 other paddlers over a few beers, anticipating the paddle to be undertaken the next day.

The first day started at the Z-bend, loading all the boats on the Patrol and heading up-stream to Ross Graham lookout. A scrabble down a 30m cliff to the river and we were away - 8 experienced paddlers in play boats on a legendary WA river. The day was about 35 degrees and the water was about 25 degrees, so everyone was well packed with water and sun block for the trip. Immediately the scenery is impressive. The chocolate brown water, the red and white cliffs and lots of wild life. 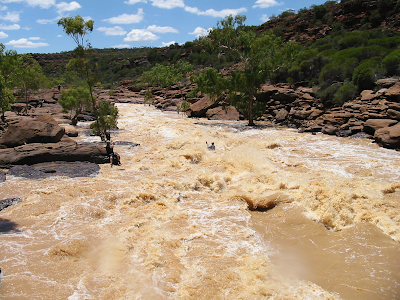 The first signs of rapids occur as the river narrows into a deep gorge giving rise to a large wave train called Mentox, quickly followed by the first real drop, called Purgatory. Most people got out and scouted the drop; a massive green wave followed by huge pressure waves for about 100m. I chose to paddle the drop unsighted for a little extra thrill. As you drop down the massive waves, you loose all sight of the river bank. You then climb 2-3m up the wave and have about 1-2s to quickly scout the next few waves.

I dropped into a massive "thumping" wave. I sucked up into the cushion and got hurled forward and slammed down on the green face; a few seconds of surfing followed by a second slam and I was thrown off the wave. Due to the sheer walls of the gorge and fast flowing water there was no possibility for a second attempt. 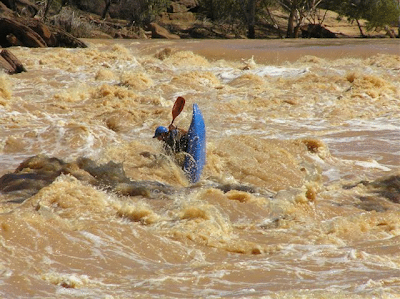 Everyone slowly paddled the drop and marvelled at the size and steepness of the waves. Its then that people started realising that the river was probably 30-40m deep and were glad they didn't swim. Watching the river flow into massive under cuts on the outside of bends means that most lines take the inside route.

The next few rapids were very similar, though not as large. Massive waves, large thumping holes which offered the game a few seconds of a wild ride.

Lunch saw us stop at one of the rare play waves on the river with eddies on both sides. Most sat in the water, cooled down and watched as others played

A short paddle followed to the Z-bend, the get out point. The Z-bend is a 500m long rapid jammed between 40-50m high cliffs. The first rapid is the combination of massive hole and possible the steepest standing wave I've ever seen. From the bank it looked ok, but when you dropped over the lip and were standing vertically inside your boat, looking at a vertical face in front, you start paddling hard just to get over the top. To the left is a huge folding hole and the right is rock. Right behind the first wave is a second thumping wave offering a quick hard ride and the loosening of a few teeth.

Following the wave train is a large pool and the get out point. We hid our boats up in the cliff and sat around in the water cooling off for an hour or so. A hot difficult climb up ladders and a crack in the cliff to the cars and a few cold beers. We had completed the 1st day (6hr) without incident.

The 2nd day saw five more paddlers join the group and a difficult climb back down the cliff with boats. The rapids on this shorter stretch to the Loop were similar to the 1st, though not as large. The high light was the play wave where we stopped for lunch. This was a fast green wave offering hours of fun. From the play wave, we navigated 4-ways, the last real rapid of the trip.

With a larger group, progress was slowed. Photos were taken at the larger drops and people seemed more relaxed. Finally we arrived at Natures Window at the start of the Loop. Natures window is a square window in the cliff face about 40m above the water. Again we scrabbled up the cliff, this time carrying boats. Arriving at the top of the cliff hot and exhausted, we crowded out a couple sitting in the window enjoying the view. We rested for a while before starting the 1km walk back to the cars. 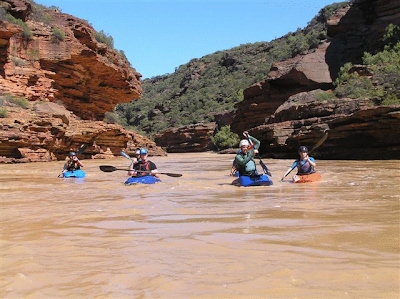 The weekend finished with a few cold beers looking down on the river wondering when we would next get the opportunity to paddle the Murchison.

All agreed that the Murchison, while not being technically difficult, was one of the most spectacular rivers paddled.

Thanks to Dan, Ken, Hamish, Sean and Matt for photos.

My brother and his wife threw a punk party. Its really easy to gear up for a punk party, a bit of super glue, some old clothes from the op-shop, a few tears and a bit of imagination. 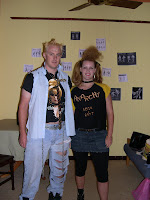 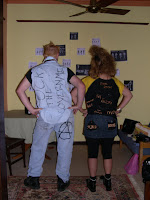 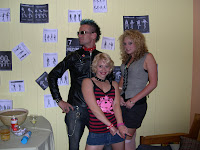 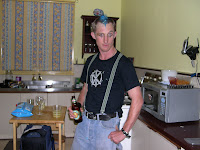 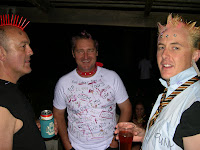 The red golf tee's are particularly inspirational.
Posted by Stu at 10:08 am 0 comments

Christmas saw 28 friends and relatives converge on our place for lunch. No one went away hungry. 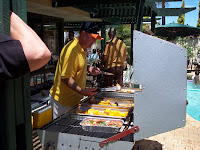 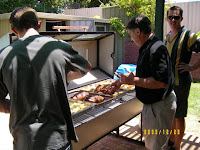 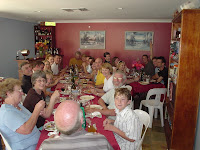 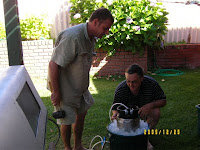 You have to love that BBQ affectionatly called The coffin. We roasted 2 legs of lamb, 1 rolled pork loin and vegies all together. Thanks Kim. Unfortunately my keg of home brew didn't even make it to lunch. It was just to good.